A mechanical watch, as opposed to quartz watches, which are quartz watches synchronized to an atomic clock through radio waves, employs a clockwork mechanism to measure the passage of time.

A mainspring powers a mechanical watch, which must be wound manually or by a self-winding mechanism on a regular basis. The balancing wheel, a weighted wheel that oscillates back and forth at a consistent rate, is powered by the force supplied through a series of gears.

With each swing of the balance wheel, a device known as an escapement allows the watch’s wheels to move forward a small amount, propelling the watch’s hands ahead at a constant rate.

A working mechanical watch’s ‘ticking’ sound is produced by the escapement. Spring-driven clocks, which first emerged in the 15th century, gave way to mechanical watches in the 17th century throughout Europe.

Mechanical watches are less accurate than quartz watches, and they need to be cleaned and calibrated by a professional watchmaker on a regular basis.

Quartz watches have dominated the watch industry since the 1970s, and mechanical watches are now primarily a high-end item bought for their aesthetic and luxury values, appreciation of exquisite craftsmanship, or as a status symbol.

Humans have been perfecting their timekeeping methodology and instruments since the dawn of civilization. Sundials from the fourth millennium BC in Ancient Egypt are the oldest dated timekeeping devices.

Water clocks, hourglass, mechanical clocks, automatic clocks, digital clocks, and many more technological advancements in horology have been invented since then. We’ll look into the history of mechanical watches and its significance today.

Mechanical clocks were first used in churches and buildings as enormous, weight-driven timepieces. The watch installed within the Dunstable Priory in England in 1283 is the oldest mechanical watch on record.

For generations, most people living in villages relied solely on the bells of these gigantic clocks to tell the time. However, by the 15th century, due to its increased accessibility, a smaller, more portable clock began to gain importance in the home.

The next logical step was to make compact clocks that could be carried around or worn, which led to the development of the watch.

A German locksmith named Peter Henlein is credited with inventing the first watch. These timepieces are thought to have been made for wealthy people in the early 1500s. Because of the genius creation of the mainspring, they were able to be constructed in such small proportions.

Winding the knob on the mainspring allowed energy to be stored, which was then utilized to power all of the watch’s other gears and components. After winding, Henlein’s watches can endure for up to 40 hours.

Is Investing in a Mechanical Watch Worth It?

Mechanical timepieces are typically worn by persons who value tradition and good craftsmanship. These stunning mechanical watches are well worth anyone’s money due to the amount of time and effort that went into their creation, as well as the fact that they are true engineering marvels.

Mechanical timepieces are much more than fashion accessories. They are, in fact, complex time-telling systems.

Mechanical watches are beautiful mechanisms that are typically purchased by serious watch collectors and enthusiasts. They’re sold for tiny fortunes by luxury watchmakers, especially if the mechanical movement has complications that add to the design’s complexity.

What is the Mechanism Behind Mechanical Timepieces?

The winding stem provides the energy that drives mechanical movements. It is wound by spinning the crown on hand-wound watches and by winding a ball-bearing rotor on automatic watches.

The rotor pivots on its staff, winding an s-shaped mainspring when the watch is moved by the arm.

This spring is usually wrapped in both directions of rotation when used in automatic movements. Overtightening of the mainspring is prevented by a slipping clutch. The barrel is turned as the spring relaxes over time, causing the other wheels in the gear train to turn as well.

The chronograph movement permits the watch’s unregulated gear train to advance or “escape” by a set amount, turning the rotational energy imparted into a periodic cycle.

The balancing wheel controls the cycle. Finally, the gear train’s movement is conveyed to the hands, which display the time on the dial.

Synthetic gems like rubies are used as bearings for moving parts in the majority of high-quality mechanical movements. Stone and steel have less friction than two steel components, which minimizes wear and improves accuracy.

Friction, on the other hand, can never be totally prevented, and even the tiniest dirt particles that have pierced the watch can contribute to lubrication and material wear and tear. Extreme temperatures, such as magnetic fields, can speed up this deterioration and should be avoided.

There is no set revision interval because how often a revision is due is highly dependent on personal wearing habits and, of course, the movement itself. A mechanical watch should be reviewed every 3 to 7 years as a rule of thumb – the watchmaker disassembles and cleans the entire movement before reassembling and oiling it.

Mechanical watches Aren’t for Everybody

People who enjoy technology should think hard before purchasing a mechanical watch since they may believe they have something obsolete. A mechanical watch, on the other hand, is a must for those seeking more elegance.

A mechanical watch collector could have one or more watches to wear with the appropriate suits or gowns at various occasions. There is no requirement that mechanical watches must have a traditional and dreary appearance.

When Should You Service Your Mechanical Watch?

Any mechanical watch needs to be maintained at some point, but there is no set time range. Service intervals of 4-5 years are commonly recommended by watch producers, however, this isn’t always necessary.

The only time you should have a mechanical watch serviced is if it is damaged or loses accuracy. Other evident indicators of a watch in need of service include the physical breakage of a watch part.

Why are Mechanical Timepieces More Expensive? 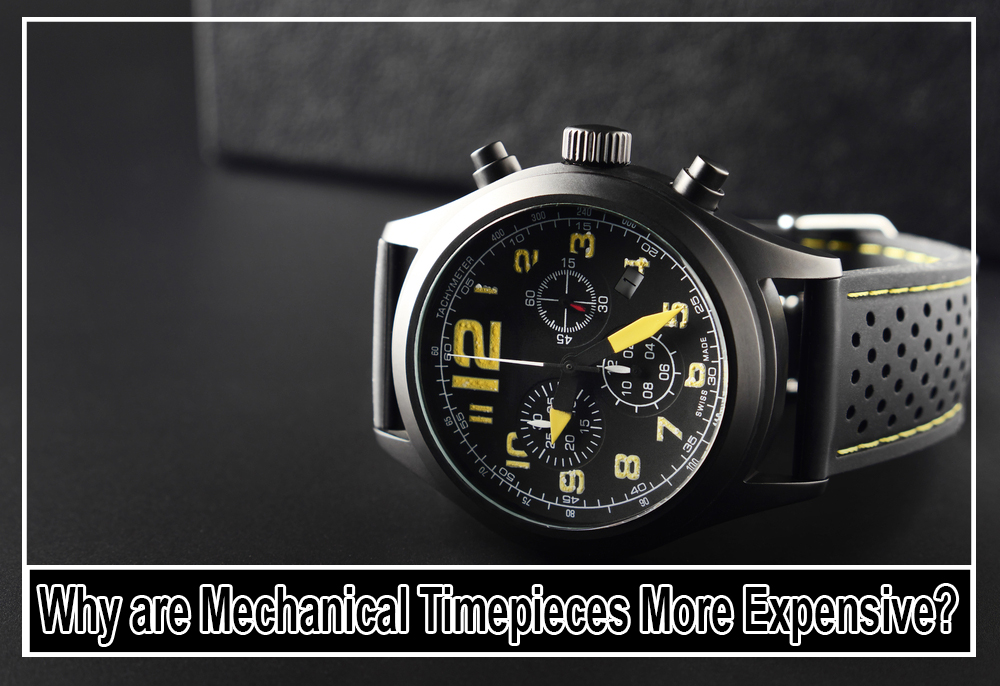 Even for the same watch, mechanical and automatic watches are frequently much more expensive than quartz models. In rare situations, a watchmaker will even provide the same watch with a mechanical or quartz movement of your choice. The mechanical watch will cost extra.

Quartz movements used in higher-end luxury watches are marginally less expensive to produce than their mechanical equivalents, though the difference is not significant.

Keep in mind that the movement costs only a small percentage of the total selling price of most luxury watches.

Mechanical watch warranty claims are extremely rare because there is almost nothing that can go wrong with the mechanism. Because mechanical motions are more likely to require in-warranty service, the cost is included in the price.

As a result, mechanical watches do not sell as quickly as quartz watches, resulting in a slower return on investment for both the producer and the retailer.

What Is the Process of Making a Mechanical Watch?

The very first timepieces were hand-wound. They were all mechanical, with each winding providing power. The same principles apply to mechanical watches today. A mainspring is used to move the mechanisms inside a mechanical watch, and it must be wound on a regular basis.

The balancing wheel is moved by the energy transmitted by the mainspring. The back and forth motion of the balance wheel is constant. Mechanical watches must be adjusted at least once a day to re-establish the pressure in the mainspring.

Why Do the Majority of People Choose Quartz to Mechanical?

I’d consider a quartz watch as a beater, but I’d never spend full price for one since I can’t stomach watching the second-hand tick away one second at a time.

And as for the more modern quartz watches with smooth sweeping seconds, the fact that they are quartz is enough to make me say no.

There’s something about the beauty of a mechanical watch as the second-hand sweeps effortlessly through the revolution that makes you feel and appreciate that what’s beneath the dial and inside the case is a work of engineering art.

Final Words- Are Mechanical Watches Worth It?

Finally, a mechanical watch is a rare, valuable, and long-lasting object that may be passed down to future generations, even if it has spent decades on the wrist of its first owner.